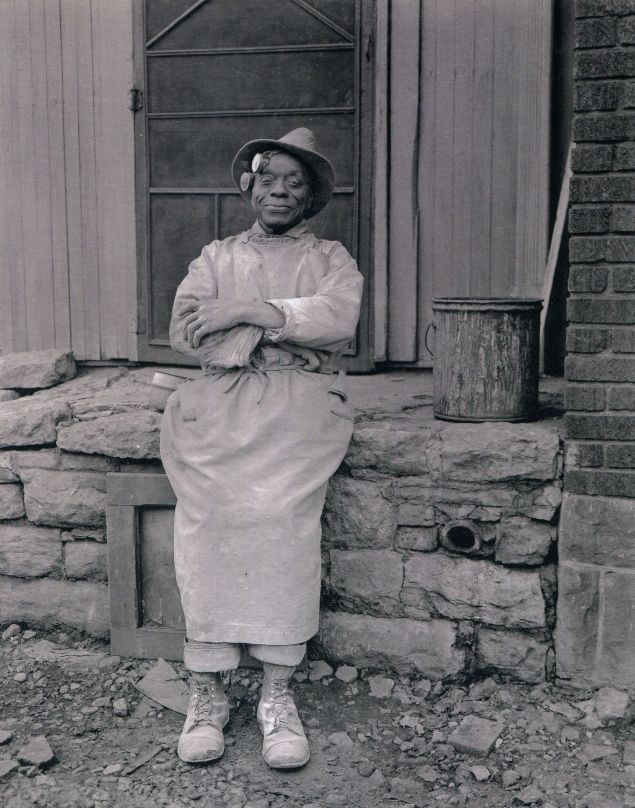 Seventy three years ago today, on December 30, 1941, William Edmondson focused his penetrating gaze into the lens of photographer Edward Weston, artist-to-artist. Arms crossed, confident, William’s callused hands rested lightly on his sleeves. A slight, knowing smile formed at the corners of his lips as Edmondson leaned against the stone foundation of his back porch in Edgehill, one of Nashville’s segregated “Negro neighborhoods”. Edmondson was dressed for work on this cold December day, as he was nearly every day. Worn leather work boots over heavy woolen socks. A heavy canvas smock covered denim work pants and long sleeved shirt. An old felt fedora perched on his bald head, and a pair of safety goggles sat askew on his forehead.

Weston was a celebrated photographer of the Modernist school who was traveling cross-country from California, on a commission to illustrate a book of Walt Whitman verse. Weston hunched under the black cloth hood of his massive wooden view camera opposite Edmondson, peered at the 8×10 inch groundglass, and adjusted his focus and shutter settings. It was a rare moment: two world-class artists at the peak of their creative powers, face to face. Despite their differences in age, education, social class, and race, here was a moment of wordless communication and understanding between two visionary creators, two artists who shared an astute understanding of form and abstraction, two revealers of beauty and meaning.

For nearly ten years, the retired janitor Edmondson had chipped away at limestone in his backyard workshop day in and day out, dawn to dusk in all weather. He created hundreds of sculptures, a vast and varied array of figures that ranged from angels and religious figures, to friends and neighbors, birds, squirrels, and other “critters”. By a series of happy coincidences, his work came to the attention of curators at New York’s Museum of Modern Art, where he became the first African American to be given a solo exhibition, in 1937.

By late 1941, it had been four long years since Edmondson’s show at MoMA (or “The Modern”, as it was known at the time). Four years since his work had been exhibited at the very same groundbreaking institution that introduced the art world to Picasso and Dali. Four years since critics and tastemakers offered tepid praise or outright dismissal of his work as the “unconscious”, “childlike”, “charming” but ultimately unimportant noodlings of an untutored Negro folk artist.

None of this mattered much to Edmondson, and perhaps he expected it, based on a lifetime of having to navigate the South’s racial codes. Though he appreciated and needed the income his work provided, he was indifferent to — even suspicious of — fame. He became an artist because of a strong voice, he said, came from God. His motivation was not fame, but to live in harmony with God’s plan for his life. His deeper goal was to honor the departed with his tombstones, beautify gardens and homes, and as he put it, spread God’s wisdom. 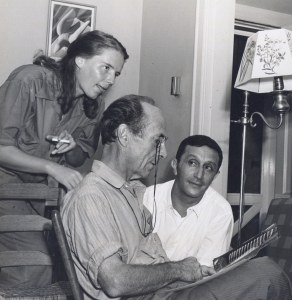 Edmondson’s patron and friend, the white Jewish theater owner Alfred Starr, had helped arrange William’s show at MoMA and he continued to help him, introducing Edmondson to a succession of white artists and potential customers over the next several years. When Starr met Weston through a mutual friend during the Nashville visit, he promptly drove the photographer to Edmondson’s home to meet the sculptor. On this first visit to Nashville, in September, 1941, Weston took several photos of Edmondson before continuing eastward on his photographic trek.

On December 6, 1941, Japan attacked Pearl Harbor. America was suddenly thrust into war, and Weston and his wife Charis cut their trip short. As Charis remembered, “Racing against weather and the expected shortage of tires and fuel, we didn’t linger for long once we headed west.” However, they “couldn’t resist” stopping in Nashville to visit Edmondson one more time.

So, on a chilly, snowy Tuesday, December 30, 1941, sculptor William Edmondson posed for one more portrait session by photographer Edward Weston at Edmondson’s home at 1434 14th Avenue South in Nashville, Tennessee. Edward lingered, carefully and meticulously placing his camera and adjusting the settings just so. Two artists, meeting across a wide social and cultural gulf. Two artists, meeting each others gaze with respect, as equals and partners in creating a powerful and enduring portrait.