Nurse Wootton on the Toilet

Nurse Wootton on the Toilet

“That’s Miss Wootton. I put her on the pot!” grinned William Edmondson, his eyes twinkling with mischief. The sculptor was speaking with Mimi Cunningham, a former bookkeeper with Women’s Hospital of Tennessee, as they stood outside his backyard workshop and contemplated a limestone figure of a nude woman seated on a pedestal-like bench. He probably let out a booming laugh, as the diminutive artist often did. 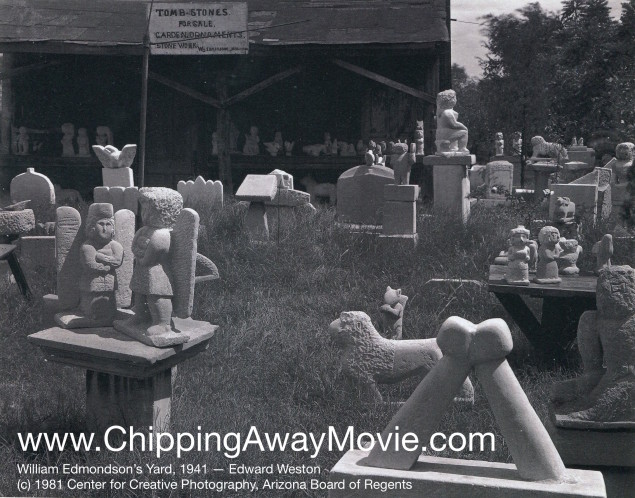 Cunningham and a group of dieticians and nurses —former co-workers— had come to visit William after seeing him in the local Nashville newspaper. Imagine their surprise when they read how William, who they had known years before as the hospital’s hardworking, jovial Negro janitor, had suddenly become an internationally-known sculptor, recently receiving the highest honor in the modern art world: a solo show at New York’s Museum of Modern Art — a first for an African American.

William lived in a tidy brick bungalow that he shared with his sister and several nieces and nephews they were raising. His yard was wide and deep, and next to the house stood a large, rough-hewn workshop. A hand-lettered sign hung from a metal post, proclaiming “Tomb-stones For Sale. Garden Ornaments. Stone Work. Wm. Edmondson.” 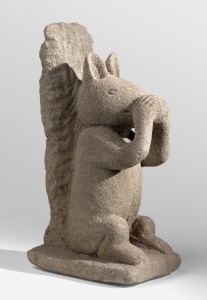 When Mimi and her friends drove up to William’s house in Nashville’s segregated Edgehill neighborhood, they were treated to a wondrous and otherworldly sight. Sculptures sprouted everywhere. Dozens upon dozens of hand-carved limestone figures, most of them no more than two feet tall, perched on benches and tables, or poked up through the tufts of grass in his yard. Religious icons, including angels, preachers and Christ on the cross. Mourning doves perched atop blank tombstones. Mischievous squirrels, rabbits, and opossums. Cheerful birdbaths with stone cardinals perched on the sides. Regal lions and sturdy draft horses. Boxers and lawyers.

And women. William’s carvings showed a fascination with, and reverence for, women. He carved dozens of women. Teachers, wise and confident. Brides, demure and hopeful. Figures that resembled the popular comic character “Little Orphan Annie.” Church ladies, neighbor ladies, and First Lady Eleanor Roosevelt, who was known for her outspoken commitment to advancement for the black community.  And William carved nurses, depicting them as stoic, angelic figures…often literally blurring the distinction by carving a nurse with angel wings.

In 1932, a year or so after the Great Depression forced the closing of Women’s Hospital, William received a “calling”…a vision that he said came straight from God. Others were called to service as pastors, but William saw sculpting as his sacred trust. Now, his boss was God, and he labored tirelessly and loyally. The yard full of figures that Mimi and the dieticians encountered was the fruit of that labor.

Edmondson’s work, carved out of discarded limestone from wrecked buildings, could appear crude and unfinished at first glance, especially to eyes trained only to appreciate the classical Greek and Roman sculptural ideals. But the burgeoning art movement birthed in the first decades of the twentieth century, known as Modernism, had introduced the values of simplicity, abstraction, and economy of expression to the visual arts. William had discovered these principles on his own. Through five years of dogged practice and experimentation, Edmondson had developed a visual vocabulary that was tactile, expressive, and full of life. His sculptures invited the eye to linger, and practically begged to be touched.

This figure that William and the white ladies from the hospital stood before was a bit different than his usual subject. William seldom sculpted nudes — a notable exception being his magnificent Assyrian “Eve”. But this figure was undeniably naked, sitting straight up and staring forward, hands on her knees. William depicted her anatomy in a simplified, but observant way. Like many of his female figures, she was stout, but with tapering curves that reveal a keen artists’ eye. Her chest jutted forward in strong geometric planes. Viewed from behind, the curve of her waist, back, and buttocks were well-defined. Her skin was a smooth as the porous stone would allow, her hair was lushly textured. 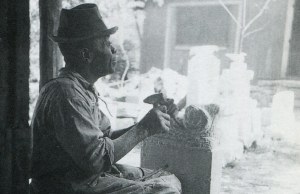 William had worked for twenty years at Women’s Hospital. The patients, doctors, nurses, and most of the staff were white. Only the small service staff of janitor, cooks and chauffeur were black. William was gregarious and good-humored by nature, and it served him well, helping him to navigate the peculiar racial culture of the Jim Crow South and the realities of a janitor’s life. There was no nine-to-five schedule for a man in William’s position. You worked until you were allowed to go home. William’s work was often so demanding that he had a room at the hospital to stay in.

Nina E. Wootton was the Superintendent of Women’s Hospital, giving her an authority that she wielded with a haughty Old-South attitude. It must have grated on Edmondson’s nerves. He once confided in exasperation to a co-worker: “Slave days is over!”

Despite everything, William liked his job and was well-liked by the staff, according to available accounts. He was so well-liked, in fact, that the hospital provided a salary advance to help him buy his house around 1915.

Devoting his life to pursuing God’s will clearly didn’t mean abandoning his sense of humor. And so it was that William offered a lighthearted, but revealing commentary with a few of his former co-workers that day. Their old nemesis Nina Wootton, powerful and self-important, was now immortalized in stone by William’s skilled hand….sitting on the toilet.

“That’s Miss Wootton, I put her on the pot!” 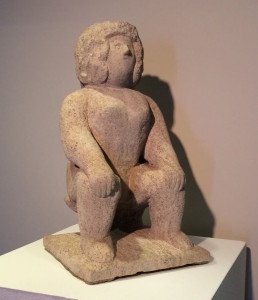 William often carved more than one sculpture of a favorite subject. He had created at least three previously-known versions of “Miss Wootton/Seated Nude”. These statues were owned for many years by Edmondson’s patrons Alfred and Elizabeth Starr, and were displayed in their garden as “The Three Graces.”  A fourth “Miss Wootton” was purchased from the artist, along with two other works, by a private collector in 1949. Unknown to the art world, it resurfaced in November of 2014, when it was loaned for an exhibition at Cheekwood Art Museum in Nashville.

In addition to being an important, previously unknown surviving Edmondson, it is extremely rare for another reason: This “Miss Wootton” is one of only four sculptures that he is known to have signed. The letters “W/M” are carved into the rear of the base of the sculpture in Edmondson’s characteristic block letters. The other two Edmondsons, also major works, are a “Little Orphan Annie”, and a “Boxer”. These were also seen publicly for the first time at the 2014 Cheekwood show.

This unknown “Miss Wootton” has just been listed for auction by Christies. Major Edmondsons have sold in the past for over $400,000. Given the level of current interest in the artist, and the quality, rarity, and condition of this work, it will be interesting to see what it fetches. It wouldn’t surprise me if it sets a record.

(Note: Nurse Wootton’s name is usually spelled as “Wooten”, due to an error by an early Edmondson biographer.
“Wootton” is correct, according to the 1920 Census and other published information. This post has been updated. After the closing of Women’s Hospital, Nina E. Wootton continued a distinguished career in nursing, )

One Response to “Nurse Wootton on the Toilet”